Solar: A Bright Future for Every Neighborhood

“Going solar” is going mainstream across the United States.

This story goes beyond the new California standard for solar on practically all new homes starting in 2020. Impressive numbers show the nationwide movement.

The U.S. solar market installed almost 50% more solar energy capacity in the third quarter of 2019 compared to the same period in 2018. Last year, the U.S. passed 2 million total solar installations. Renewable power is projected to grow by 50% between 2019 and 2024, with solar leading the way.

At Bank of the West, we’re doing our part. We decided in 2018 to commit $1 billlion in financing over the next 5 years toward clean, efficient and renewable power sources—including discounts for homeowners on loans for solar panels.

In addition, we’ve teamed up with the nation’s largest nonprofit solar installer GRID Alternatives to promote a more equitable sharing of solar technology. Based in Oakland, Calif., GRID Alternatives works nationwide to bring green solutions to economically challenged communities. It also gives job training for careers in the solar industry.

Since completing its first single-family solar installation in 2004, GRID Alternatives has installed nearly 13,000 solar power systems to date. All those solar installations have prevented approximately 1 million tons of greenhouse gas emissions and generated an estimated $380 million in lifetime savings.

Those results are making a difference in our communities and for our planet. That’s the kind of impact that Bank of the West supports and why we teamed up with GRID Alternatives. Working to make solar mainstream goes hand in hand with our bank’s policies on what we do and don’t finance. 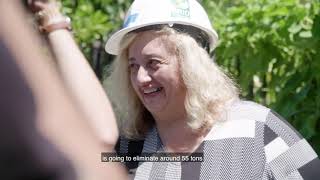 Where You Put Your Money Matters

At Bank of the West, your deposits do not finance Arctic drilling, coal-fired power plants, fracking, or big tobacco. Instead, they are helping fund more than $1 billion in renewable energy projects.

* By providing this information, you are consenting to be contacted by Bank of the West and its affiliates regarding products and services that the bank offers. For more information please see our privacy policy.